“Talent is an accident of genes – and a responsibility.”

It’s been a weird old week and I’m so sad to hear about the death of Alan Rickman. He has in turn thrilled, terrified and moved me in everything from Die Hard to Harry Potter , and it is tragic to think that he has played his last part. God Bless.

Lovely words from Daniel Radcliffe: “Alan Rickman is undoubtedly one of the greatest actors I will ever work with. He is also, one of the loyalest and most supportive people I’ve ever met in the film industry…As an actor he was one of the first of the adults on Potter to treat me like a peer rather than a child. Working with him at such a formative age was incredibly important and I will carry the lessons he taught me for the rest of my life and career. Film sets and theatre stages are all far poorer for the loss of this great actor and man.” 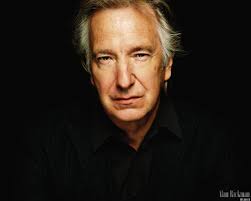