An ode to daddies everywhere…

A little while ago, on the breastfeeding forum I am a part of, someone asked about how best to support their wife when she gives birth to twins in a few months.  Lots of responses followed, not least those that simply acknowledged the poster for even bothering to ask this in the first place, while others suggested everything from cooking meals to what not to say in the middle of a screaming session at 4am. But the most touching responses are those that acknowledged how much the support of their partner had made the difference between surviving, and struggling, with twins.

When we were first told we were pregnant with twins one of the things I was surprised to read, or be told, was how twins had actually brought couples together, healed rifts, saved marriages. How? Everyone knows that babies are one of the biggest stressors in any relationship – exposing cracks and shining a brutal spotlight on our weaknesses and idiosyncrasies. As your shifting priorities collide – usually in the middle of the night to a soundtrack of screaming – new parents can feel that they have never been more alone and more alienated from the one person they thought would never let them down.

It seemed logical that twins would merely exacerbate an already difficult situation. Not so, it turns out. As a twin mummy explained to me recently, having two babies to manage means a sense of fairness and equality returns to the relationship. You can’t throw the baby at your partner when they return from work and strop off to a bath with your hands over your ears shouting: “She’s your problem now.” Because there’s two of them. It’s just not a case of all or nothing – it’s about really truly sharing the load. Instead of feeling like you are taking turns with one tricky baby, you are forced to take a baby each, and work together, quietly and as patiently as you can, to soothe, cajole and settle.

And in doing it together you develop a new found respect for each other, and a new sense of solidarity – of really being ‘in it together’. We have spent many an evening sharing sympathetic looks across the sitting room, a crotchety twin in each of our arms. We have turned it into a game at times: “Mine’s asleep, how’s your doing?” “I’ll race you. First to get their baby to sleep gets wine.” We have helped each other out, hour upon hour, passing muslins and dummies back and forth across the kitchen table. We have laughed together when the screaming in stereo reaches such epic proportions the only thing left to do is laugh. And at night, in the dark, we pass half sleepy babies back and forth between us for cuddles and milk, administering what we can personally offer and give, supported by the other. And so, no longer does one of us sit alone with a screaming baby while the other takes a ‘much needed break’ upstairs. You suffer it together. You share the load, together. The worst and hardest thing about new motherhood or parenthood is the feeling of being alone. With twins, you aren’t alone, because you can’t be. 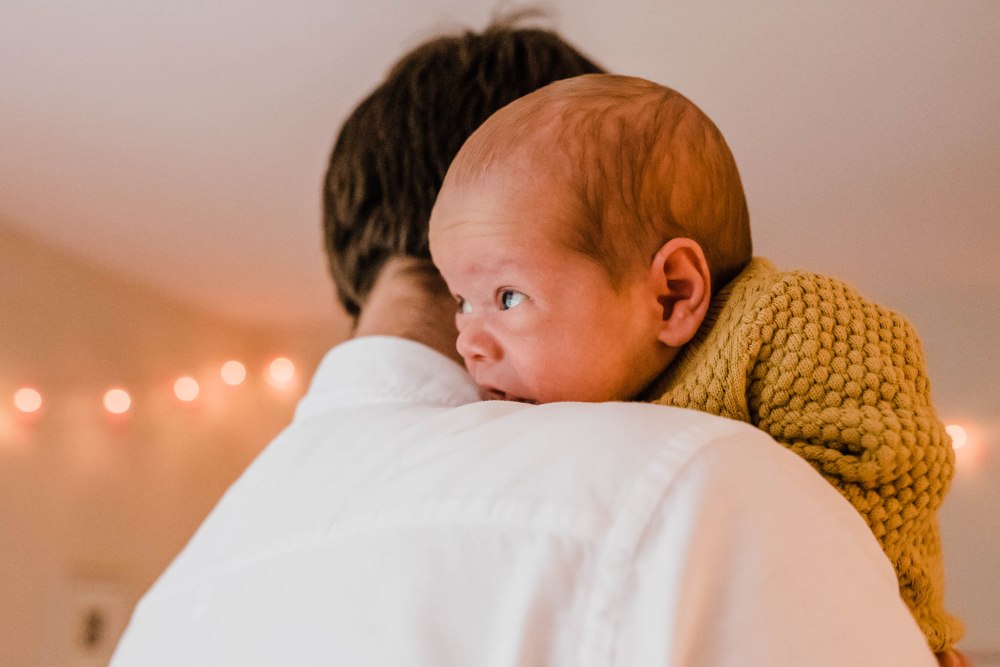 I have often heard people saying that it’s nice for dads to be able to bottlefeed to help with the bonding process. I understand this sentiment, but I think it shortchanges all the many things that partners have to offer, aside from being a food source. I might make jokes about R and his ‘useless nipples’, for instance, but I won’t joke about his useful arms, his warm heart and his infinite patience. When I am milky and tired, every single evening, he is the one who gets the babies to sleep, often one in each arm. It is him who provides a cosy, easy nook for them to fall asleep in, who is warm and soft and gentle and able to sit and sit and sit so they can sleep and sleep and sleep. He is the one that knows how much darkness they need, what kind of cuddles they want, if they are snoozy or fast asleep or restless. He reads their wriggles, decodes their distress – really, truly, understands them. He doesn’t have the prop of ‘boob’ as a solution to sleep and comfort, so he knows other clever ways to help get them to sleep and to soothe them that I have never even tried or thought of. These skills are worth their weight in gold.